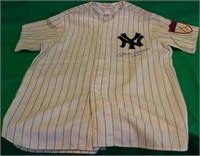 Viewing Friday Feb 22nd from 1 pm to 5 pm and Saturday 9 am to 11:30 am. This is one of the largest private collections of sports and entertainment autographs and memorabilia ever assembled. It is a single owner estate auction. Leland Campbell was a marketing professor at Bentley College and one of the original volunteers that started the New England Sports Museum now the Boston Sports Museum at TD Garden. Before his death he spent 40 years assembling his collection. He was a frequent visitor to the Baseball Hall of Fame and got to know many of the Sports figures on a personal basis. There are hundreds of interesting items related to baseball, football, hockey, basketball, tennis soccer, golf, Nascar, NASA, the movie industry and the music industry. Some of the more important items include a Mickey Mantle signed bat, numerous Hall of Fame bats signed by the likes of Ted Williams, Joe DiMaggio, Hank Aaron, Willie Mays, Nolan Ryan, Frank Robinson, Ernie Banks, Carl Yastrzemski, and many more. Signed baseballs by Roger Clemens, Billy Martin, Sandy Koufax, and all three DiMaggio brothers. There is a rare Ted Williams game used undershirt, a Joe DiMaggio signed New York Yankees uniform jersey, a Carl Yastrzemski signed glove and bat, an autographed home plate signed by Carlton Fisk, a Yogi Berra signed jersey, a 1975 team signed Red Sox jersey, a NY Giants team signed photo, a football signed by the Rams Fearsome Foursome. Other footballs include one signed by Bob Griese, Don Shula and Mike Haynes. Basketballs signed by Pete Maravich, K.C. Jones, Kevin McHale, and Larry Bird, boxing gloves signed by Marvin Hagler, Mohammad Ali, and Joe Frazer. Entertainment items are highlighted by a Bob Dylan signed Epiphone guitar and a Rolling Stones autographed drum head. Many Beatles items, some signed. 1960 signed soccer World Cup jersey signed by Nobby Stilies. Many signed baseball gloves, seats from Dodger and Yankee Stadium. Dale Earnhardt Sr. limited edition racing wing. Hockey sticks signed by Bobby Hull and Gordie Howe. Great lots of signed photos and much much more. Items can be viewed online beginning February 1. Go to: antiqueauctionsfl.com or marionantiqueauctions.com Online bidding at: liveauctioneers.com or invaluable.com For info call Frank at 508-498-7136 or email info@marionantiques.com Turkey Creek Auctions, 13939 North U.S. Highway 441, Citra, FL.
Location
Citra, FL
Details
Auction Details
Catalog
View Catalog (258 Lots)
Single Page

No bids found for this item

In the case of a tie bid, precedence is given to the earliest bid

Your Max Your Bid

Your Max Your Bid

Your Max Your Bid
Click to add notes.
Notes saved

Email Privacy Policy We have created this email privacy policy to demonstrate our firm commitment to your privacy and the protection of your information. Why did you receive an email from us? If you received a mailing from us, (a) your email address is either listed with us as someone who has expressly shared this address for the purpose of receiving information in the future ("opt-in"), or (b) you have registered or purchased or otherwise have an existing relationship with us. We respect your time and attention by controlling the frequency of our mailings. How we protect your privacy We use security measures to protect against the loss, misuse and alteration of data used by our system. Sharing and Usage We will never share, sell, or rent individual personal information with anyone without your advance permission or unless ordered by a court of law. Information submitted to us is only available to employees managing this information for purposes of contacting you or sending you emails based on your request for information and to contracted service providers for purposes of providing services relating to our communications with you.

The email address {0} has been subscribed to the email list.

Oops, there was a problem.

I was unable to add your email address to the email list. Please check your address and try again.

Oops, there was a problem.